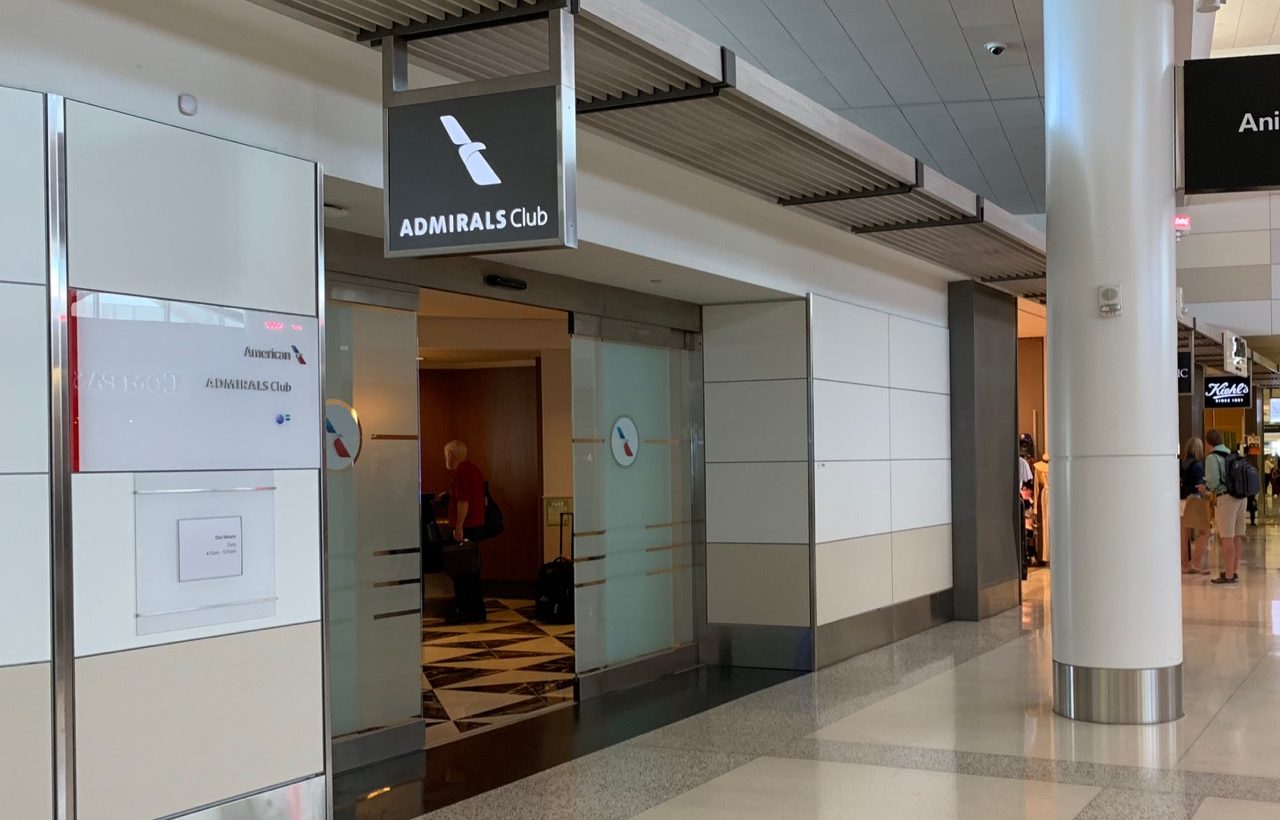 The Admirals Club SFO is a fine place to relax but doesn’t live up to the rest of the American Airlines First Class experience.

We recently traveled on American Airlines Transcontinental First Class from SFO to JFK and had the opportunity to visit the Admirals Club SFO lounge in Terminal 2. Access to the Admiral’s Club is usually restricted to AAdvantage members who pay annual fees between $550 and $650, depending on their status level, or to international First and Business Class passengers. However, passengers on American Airlines’ transcontinental routes in First or Business class also have access to the lounge.

Upon entering and presenting our boarding passes, our eyes were immediately drawn to the rotunda in the center of the lounge. The ceiling is shaped like an oversized leaf and the corners are dotted with real trees, an elegant statement that sets a welcome tone.

Immediately in front of the entranceway was a temporary-looking station creating custom-made avocado toast, complimentary to all passengers. This was a novel idea, something unique that we had never seen below. Passengers could customize their avocado toast and a chef would create it to their specifications. Toppings included an array of options including the hard boiled egg and feta cheese seen below along with either smoked salmon or prosciutto.

Unfortunately, the avocado toast really wasn’t that appetizing. The bread was barely toasted and the spread resembled avocado in color only. It seemed to have been pulverized into a fine paste and lacked the texture one would expect from fresh avocados.

The rest of the food was somewhat typical lounge fair, though relatively unimpressive compared to other mainstream US carriers’ domestic lounges. It was late morning, so the options slanted toward breakfast-appropriate choices. A selection of packaged yogurts were available along with berries and melon for toppings. Hard boiled eggs were also presented, but no hot cooked eggs of any kind were offered.

A cereal bar offered three kinds of cereal: low-fat granola, Fruity Pebbles, and Kashi Honey Toasted Oats along with milk of an unspecified type. A toaster was provided to toast the breads: plain and raisin bagels, and plain English muffins, along with three types of pound cake. Notably, there was plain bread such as wheat or white for toast.

There was a coffee station here that included La Colombe coffee, a nice change from the ubiquitous and uninspiring Starbucks that is prevalent in many other lounges.

Upon checking in to the Admirals Club SFO, we were provided with two premium drink tickets. Although standard house “well” liquor, wine, and beer, is included for all passengers and Admirals Club members, eligible passengers on a long haul flight in Business or First Class are provided one drink ticket each for a premium beverage.

When I inquired at the bar what drinks were available with these tickets, the friendly bartended stated I could use it for any drink or premium bottled water. There was a reasonable selection of top shelf liquors available including Absolut, Grey Goose, and Titos’ vodkas, Bombay Sapphire and Bulldog gins, and Patron tequila. The selection wasn’t exactly extensive and none of these brands are what I would consider very premium but nonetheless better than whatever bathtub gin would normally be served.

As it was too early in the morning for Valeriia to drink, she opted to use her drink ticket for a bottle of Perrier sparkling water. A more reasoned choice for sure, but for the sake of a more complete review, I had to test out the top shelf bar service.

I asked if they had ginger beer and the bartended stated enthusiastically “yes” but then couldn’t locate any bottles of it. He said “I’ll find it sir, give me a minute,” and then proceeded on a quest to locate a ginger beer for me, involving a manager to help locate. It was nice to feel that they were taking care of me. About a minute later, he returned with a bottle of ginger beer and made me my requested gin and ginger beer with a squeeze of lime.

All and all, the bar service at the Admirals Club SFO is a cut above the rest. Having access to premium drinks is a nice benefit, although the drink ticket voucher system does feel a bit… rationed. Wouldn’t it be great if premium drinks were available for everyone? Or if a boarding pass could be scanned to get unlimited premium drinks? We’re hoping some lounges can continue to innovate in these service offerings.

The Admirals Club SFO features ample work space with a lovely, sunlit view of the tarmac for those of us that like watching planes. The work stations all featured power outlets and, strangely, little pieces of paper and golf pencils.

The prototypical printer station was provided, allowing those that still use dead trees in their work to print.

I was pleasantly surprised to see there was an area with a standing desk of sorts. The countertop space was wide enough for maybe two people to park their laptops and work while standing, a popular option for many. If you’re going to be sitting for hours on a plane, who wants to sit in a lounge? It would be great if more lounges could add actual adjustable standing desks, since they have become fashionable. Another nice touch was the shredder under the counter.

We later discovered that there are conference rooms available for rent at the lounge, an interesting concept that I would have liked to check out, but unfortunately, we hadn’t noticed them during our visit.

There were also showers which we did not have a chance to try, but can be seen over at Lounge Buddy.

Overall, the lounge is a fine place to hangout before a flight, but pretty unimpressive when it comes to food. Since this lounge also services long haul business and first class flights, they would do well to have a higher level of service for those passengers. Or, as American Airlines has done in LAX, to build a separate Flagship Lounge. The beverage service with drink tickets was a novel way to accomplish catering to both regular business travelers and long haul premium passengers, but American needs to do more if they want to attract to these kinds passengers. 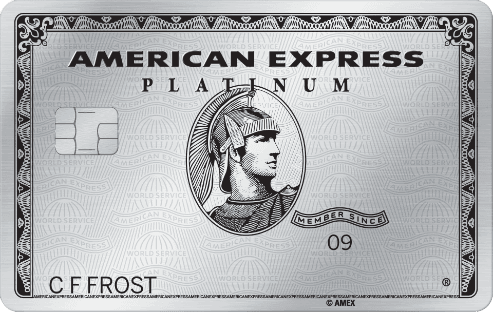 Nothing paid for entry, so no points earned.

We rate the Admirals Club SFO 3 ½ stars. Although lovely and spacious, the food selection was limited and doesn’t live up the First Class service offered by American. 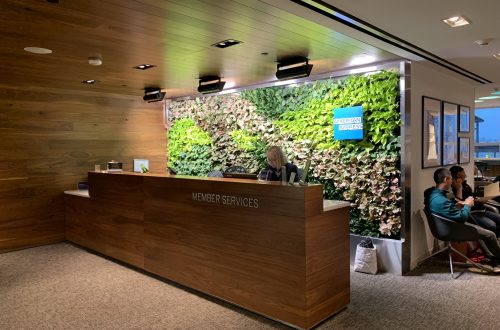 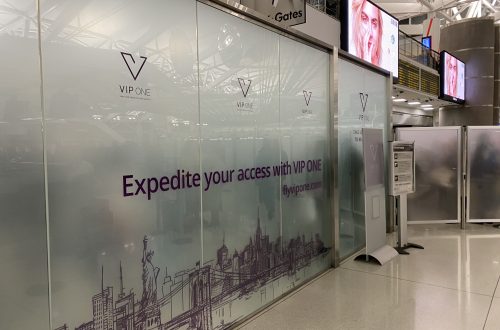